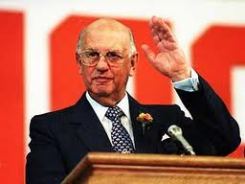 Pieter Willhem Botha was born in 1916 on the farm Telegraaf in the Paul Roux district of the Orange Free State. He begin is political career in 1946, in 1958 was deputy of the internal affairs, in 1964 became minister of public works and in 1966 was elected leader of the National Party in the Cape Province. Also in 1966 he was elected minister of defense so he was the responsible for the Border War at that time a post that he held until 1980. He did a proposal a new constitution in 1983 that created a house to Coloureds and another to Indians but with the power still being maintained by the whites. In 1984 was elected state president of the Republic of South Africa. Facing a strong international pressure to end the Aparthied regime, something that Botha refused, he resigned in 1989 giving the government to a more liberal Frederik De Klerk. With the end of the Aparthied and the creation of the new South Africa, PW Botha leaved the political scene. In 2006 he died in is house at Wilderness, Western Cape.

Facing an internal opposition by the ANC and other black groups and also liberal whites Botha tried to reform the Apartheid regime. A sign of that was is declaration saying that whites in South Africa must ‘adapt or die’. He tried to create a cleaner government and try to integrate in the government the coloured and the Indians giving a sign that he was a bit more liberal than his predecessors. He legalized the interracial marriage and the miscegenation both illegal since the end of the 40s decade. He had to deal with the development of the Border War a situation that he known well because had been Minister of Defense from 1966 until 1980. Was in is mandate that happened to battle of Cuito Cuanavale maybe the most important battle of the War that ended with the clear military supremacy of the South African forces and led to the independence of Namibia and helped to end the Apartheid regime. He understand the possible end of the Apartheid and the election of a black leader but however he didn’t done anything to end it and probably it was because he wanted to calm the right-wing faction of the regime that didn’t want any reforms. In 1984 he faced an insurrection promoted by the ANC and other opposition groups and he responded to that with the repression of activists and of the liberation movements as the ANC. In the later period of his government he abandoned the idea of a consensus and he adopted a more centralized form of government with the power centered in his persona even facing great international pressure that we will develop further on.

In the economical scene PW Botha government face a worse situation that his predecessors. A severe drought led to worse agriculture productions, a fall in the gold cost led to a smaller value of the exportations and the public deficit increased because of the demands of the military forces in the Border War. Also in the end of his mandate because of the intransigence on the end of the Apartheid regime South Africa faced a severe depression cause by a crisis  in the financial sector and the rapid depreciation of the Rand because many international investors stopped of invest in South Africa and took their money of the South African banks. Despite all this and the international embargos against Botha’s government he was able to get a positive economic growth during his mandate and also to keep the unemployment rate relatively low compared with the other African countries despite a natural increase because of the slowing agriculture productions and the international embargo against South Africa. He also tried to develop the South African industry with some success despite the international pressure against Apartheid regime. This manufacturing industry were mainly developed in the region of Pretoria and Johannesburg now Gauteng and in the Eastern Cape.

In the begin of his presidency he tried to improve the image of South Africa in the world especially as a democracy, towards the occidental capitalist states and even the United Nations. This strategy doesn’t result because the foreign critics towards Apartheid increased and the protesters wanted the end of Apartheid and not a progressive reform of the system. Still, PW Botha was able of keep relatively good relations with the USA of Ronald Reagan, with the UK of Margaret Thatcher and especially with the state of Israel. However various international sanctions were made especially by the CEE and the United Nations. The Catholic Church and the Pope John Paul II also criticized the Apartheid calling for economical sanctions. The Helderberg crash that happened in 1987 also damaged the international image of Botha’s government with the investigation saying that probably the airplane carried illegally, weapons on board that led to the fire in the cargo area that provoked the crash of the airplane near Mauritius. In the end the international pressure against the Apartheid regime was one of the reasons to the resignation of ‘Die Groot Krokodil’ in 1989 together with the internal opposition and a health problem that he had in 1989.

In conclusion we think that PW Botha mandate was a bit weak. We don’t support Apartheid but we understand that Botha faced a large number of challenges during his government and he was able to get out well of some situations especially in the economy policy. However he wasn’t able to improve the international image of South Africa that continue to deteriorate with embargos, protesting and even anti-Apartheid movements being created in several countries in the world. Also South Africa were not able to win the Border War and the opposition continue to grown in number, both white and black, and he cannot stop the terrorist attacks of the ANC. The fact that he also refused to participate in the Truth and Reconciliation Commission shows that he didn’t support the new post-Apartheid South Africa and wasn’t regretted of the policies that he took during his presidency.