A NGK church in Wolmarandsstad 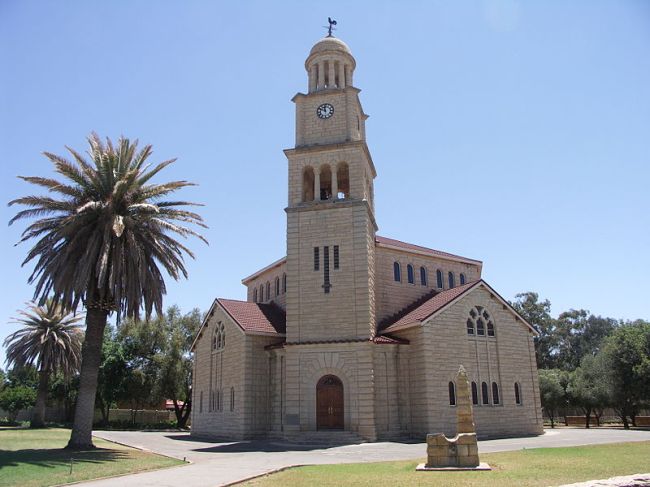 The Dutch Reformed Church is a Calvinist/Reformed church that is one of the most important churches in South Africa and most of Afrikaners follow several Dutch reformed churches that exist in that country. Also the Dutch Reformed Church was very important in the creation and development of the Boer-Afrikaner people throughout is history first in Europe and then in Africa.

The Dutch Reformed Church was created in Emden, now Germany, in 1571 following the basic Calvinist principles as the French and Suisse Calvinist churches did. The five main principles of the Calvinism are the following: Total depravity; Unconditional election; Limited atonement; Irresistible grace and Perseverance of the saints. The church was very important for the independence of the United Provinces (Netherlands) that was in a long war for independence against the Catholic Spain. Finally in 1581 the United Provinces declared independence and formed a confederation with capital in The Hague but with Amsterdam in Holland being the biggest and most important city. The Netherlands dominated the seas in the XVII century and in the 1651 the Dutch Company of Eastern Indies established the Cape Colony in the region of the Cape of Good Hope. At the same time the French Calvinists, the Huguenots, were brutally persecuted by the Catholics and the Inquisition which had is worse point at the night of St Bartolommeo were thousands of Huguenots’  were killed by French catholics.

Then in the XVII and in the XVIII centuries several immigrants went to the Dutch Cape Colony. Aside from the first Dutch settlers came also around 200 Huguenot families from France and also in the XVIII century a significant number of new immigrants especially from Germany but also from other parts of Europe. In 1665 was established the first NHK in South Africa under the jurisdiction of the Amsterdam classis. The Dutch Reformed Church gave rise to several different churches in South Africa. The Nederlandse Hervormde Kerk was the official religion of the Colony. However in 1806 the British conquered the Cape Colony from the Dutch and this led to the adoption of british laws and culture in the Cape. This led to a revolt from the Afrikaners that lived in the northeastern part of the province, the Boers, that started to trek for the regions of the Oranje Vry Staat and the Transvaal. Those Voortrekkers created also a new Dutch Reformed Church separated from the Nederlandse Hervormde Kerk, the Nederduistch Hervormde Kerk van Afrika. This church became the official religion of the Zuid Afrikaansche Republiek in 1860 under the ministry of Dirk Van der Hoff that had come from the Nederland’s in 1853. In 1858 another church was formed, the Gereformeerde Kerk and the Cape Church then known Nederluitse Gereformeerde Kerk, also  established congregations within Transvaal. In 1885 NGK and NHK churches merged but some of the old NHK members rejected the union and continued and independent NHK church. In the Cape the NGK were reestablished because of the action of Presbyterian ministers from Scotland, that were also Calvinists.  After the Second Boer War the Dutch Reformed Church were closely linked to the Afrikaner Nationalism and the Broederbond organization that wanted to unity all the Afrikaners, Boer and Cape Afrikaner, and create and independent country from the British rule and with a segregation between whites and blacks that will have their own areas to live and their own facilities and services. These ideas eventually led to the creation of the Apartheid regime in 1948. During the Apartheid period the various Dutch Reformed Churches were one of the pillars of the regime giving credibility to it.

Today the NHK, NGK and GK churches are still the three major reformed churches in South Africa with the NGK being the biggest with 1.129.207 members in South Africa and in other countries in the South of Africa. The three are mainly Afrikaans speaking churches, because of his members are Afrikaners, but other languages are also used because there are members of other origins. There are also congregations of these churches in neighboring countries such as Namibia, Botswana and Zimbabwe especially in Namibia where there are a big Afrikaner community. Another more conservative church, the Afrikaanse Protestanse Kerk was created in 1987 because of the progressive liberalization of the Nederluitse Gerefomeerde Kerk and other reformed churches in South Africa. This church has been growing in number and now has 50000 members in 240 congregations in South Africa and also in Namibia.

The various Dutch Reformed Churches were very important to the Afrikaners throughout the history and still are a very important aspect of the Boer-Afrikaner culture.