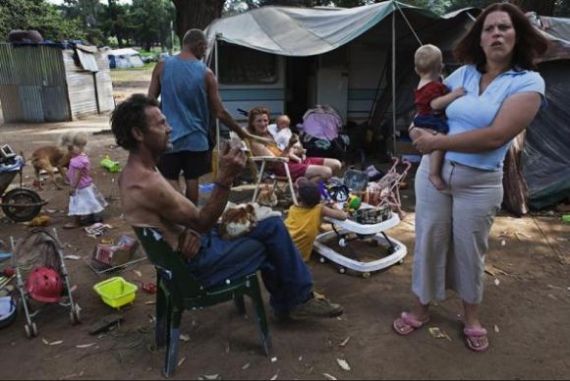 Today in South Africa one of the biggest problems that affect Boere-Afrikaners is the poverty. Around 800.000 of them live in poverty some of them even struggling to survive. They were put in this situation especially by the affirmative action policies of the various ANC governments that gave jobs to blacks that belong to whites in order to increase the quality of life of the South African blacks. The whites that became unemployed because of those policies were completely forgotten by the government. Without money their jobs they lost the money they need to keep the house and many of them end up in Squatter camps where their live in poverty with very bad conditions sometimes without any drinkable water and food with some even struggling for survive.  Recent statistics point to as much as 800.000 poor Afrikaners in South Africa with the squatter camps congregating a large number of those with some of them, around 100.000 Afrikaners struggling to survive. There are atleast 90.000 Afrikaners, in Squatter camps, with some numbers pointing to much more, and only around Pretoria there are 80 squatter camps a number the shows well the whole dimension of the problem.

As we have said before the Afrikaner poverty and number of squatter camps is increasing because the rendement of some of them is being smaller at every year. And that happen mainly because of the Black Empowment and Affirmative Action policies. Those policies have only one objective, give job to blacks at any cost allowing black people without proper formation to take the jobs at whites, coloureds and Indians that are more qualified in that specific job but go to unemployment because the government prefers to see a black person there than a person of other race specially whites. That leads to a big growing on the white’s unemployment and many of them specially with worse qualifications cannot find a job and lose the house, the car and some go these squatter camps were they started a live of poverty and difficulties.

The population living in the squatter camps is from different backgrounds. Most of them are from the middle-low class who worked on the public sector and lost the jobs because of the Black Empowerment policies. There are also some ex-militaries that couldn’t find jobs after their military careers end because they had fewer professional habilitations because since a young age they dedicated to the military. The squatter camps consist in a large number of old caravans congregated in some caravan parks were people are not spending a vacancies but living there without most of the basic living conditions. In those camps there are no drinkable water, proper food, sometimes just one or two bathrooms, the space of a small caravan is too small to families that are sometimes of 5 or even more because sometimes we have 3 generations of the same family living in the same caravan.

Because of the bad conditions in the camps and the poverty, some marginal behaviors increase. The two major problems provoked by the bad social conditions are alcoholism specially of men and domestic violence in the vast majority of men against women. There are a lack of professionals that can lead with this subjects and the as always police doesn’t care with the security of the people that are attacked. The inexistence of proper hygiene conditions led to diseases and infections caused specially by lack of food or spoiled food and by undrinkable water that are sometimes drink because is the only water available.

These people are really poor and need our help to sustain their lives sometimes even to survive. Many people forget or don’t even know the situation of these people. Boere-Afrikaners don’t have a state to help them and so they are dependent on the help of individuals or founds. So is essential that we help these poor Afrikaners to keep with their lives running or sometimes just to help them survive.

This video with the song of Bok van Blerk, Die kleur van my vel, is in honour of the habitants of Coronation Park sqautter.