Afrikaner on side of Malema 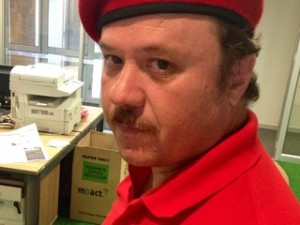 Sometimes we think we’ve seen everything already, but not this time .. what seemed impossible has happened. A Boer-Afrikaner standing next to Malema and the EFF. Called Wiekus Kotze and says he is ready to fight for the EFF and praises Malema saying that this has an extraordinary understanding of the South African economy.
This statement is a lie, Julius Malema knows nothing of the South African economy, its only strategy is nationalizing everything that moves. Nationalization of the mines, nationalization of properties of white etc. Malema just want to create a more bureaucratic and excessive state that discriminates against whites.

He says: “Some of the things you can not even repeat. They told me I was an idiot, a fool, that I was sucking up to black people, that I was a traitor betraying my white skin.
“I only ask Them: ‘What is a white skin? Is your skin color making you higher because if you’re saying I’m betraying the white skin, it simply means you still believe the white skin is superior. I’m saying to them ‘you still suffer from the Verwoerd mentality based on the fact you are white and then, your language is Afrikaans.’

Wiekus is not na idiot because he’s betraying white skin, he’s na idiot because he’s joining na openly racist party led by a extremist man who only want to take advantage that a white man entry his party to say that he’s not racist. Wiekus is betraying not his skin but his culture, the Boer-Afrikaner culture because he’s on the side of a man that descriminates Afrikaners for being afrikaner and despises our traditions and culture.
Kotze says he wants a reconciliation of South Africa but this is precisely what the EFF is not, the EFF is a party of the confrontation! A party whose leader says, among many controversial interventions that Mandela was too soft with the whites can not be a peaceful party, may not want to reconciliation, on the contrary, promotes racism and discrimination.

Surely that Kotze who agrees with this banner and that it does not incite violence. This kind of banners that Kotze support and defends…..