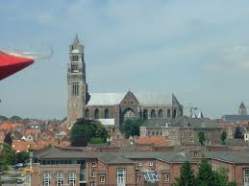 Flanders is a region is the North and West part of Belgian inhabit by the Dutch speaking Flemings. The region have being trying to get independent from the rest of Belgium and in some cases to join Nederland’s. The name Flanders could have different meanings. The social, cultural, economic, linguistic and political region in which inhabit the Flemings. The geographical region in the north of Belgium coinciding with the federal Belgian state’s Flemish Region or the geographical region consisting or the two more at west of Belgium the Wes-Vlaanderen (West-Flanders) and the Ost-Vlaanderen (East-Flanders). The region was very important during the XV. At this time Antwerpen was one of the most powerful cities in Europe, the richest of them, with a lot of trade from all over Europe and the Flanders region thrived because of that. In 1556 it became under Spanish control. During the Dutch independence war the Flanders was disputed between Spain and the United Provinces. This was a time of a strong intolerance of the Spanish Catholics towards the Protestant Flemings with many fleeing to the United Provinces. The region became them part of the Southern Netherlands. During the Napoleon Wars, France conquered and used Antwerpen as an important naval port. In 1830 the kingdom of Belgium was created with Flanders being part of it. However this not meant good news to the Flemings because Belgium was dominated by the French Bourgeoisie. French became the only official language in Belgium and the Secondary and Superior education in Dutch was suspended. The Flemings were treated by the Walloons as second class citizens. A proof of this was these words of one of the founders of the Belgium senate: “one of the more inferior races on the Earth, just like the negroes”. These events and words caused a big discontentment of the Flemish people but just in 1878 Dutch was allowed to be used as an official language in Flanders. Just, in 1898 Dutch and French were considered equal in laws and Royal Orders. Flanders was very affect by the I World War resulting in much damage both of life and resources. Before the Second World War several Fascist or National-Socialist groups grew in Flanders some of them with an Anti-Walloon stance. Some of them collaborate with the Nazi occupations because they give more rights to the Flemish people. After the 2ND World War the differences between Dutch speaking and French speaking Belgians led finally to reforms that transformed Belgian in to a Federal state with communities, regions and language areas. These resulted in the formation of a Flemish parliament and community. Several parties have been asking for more autonomy to Flanders. Today Flanders has parties, some national Belgian parties and others just Flemish parties. The main party is the Christian Democratic and Flemish, Christian democratic, with 31 deputies, the Open Flemish liberals and Democrats, Liberal, with 21 deputies, and the Vlaams Belang, Nationalist, with 20 deputies. The minister-president of the region is Kris Peeters of the Christian Democratic and Flemish party.

We think that there should have closer ties between Boer-Afrikaner and Flemish organizations. The two people have many things in common, similar language; suffer a period of discrimination of other people and both seek their self-determination. Also some Boer-Afrikaners have also Flemish ancestry. We think that it could be positive contacts with the Christen Democratisch en Vlaams, a Christian democratic party as the Vryheidsfront, the Vlaams Belang a nationalist party that want an independent Flanders now more moderate than before, and the Niuew Vlaamse Alliantie a conservative-liberal and separatist party that has also much in common with the Vryheidsfront and with many Boer-Afrikaners. So and alliance between Flemish and Boer-Afrikaner organizations is clearly possible and in our opinion very positive to both.

One response to “The Flemish question”