The president of South Africa, Jacob Zuma was seen recently involved in another scandal, this time it was not a sex scandal but over a corruption scandal.  President Zuma improperly appropriated public money (14 million) to work on their private property in the rural Southern village of Nkandla. Among these improvements are set to build a swimming pool, a football field, a visistor’s centre and also an amphitheater. Many neighbours were moved

This news came after the report of the Prosecutor Thuli Madonsela as it classifies those measures as unlawful and unethical posture Zuma.

The court also condemns the president to pay a reasonable proportion of the costs of the work that are not related to the security of your property.

It is this country that the Boer–Afrikaner people is required to be included? One where the Rulers beyond descriminarem us and being racist are highly corrupt country? We have already pointed to the perception of corruption in South Africa is to rise in the rankings and these cases only contribute to this situation worsen. In addition, the President of South Africa not dividamente protects the resources of South Africans to use taxpayers’ money and does not respect the South Africans since it makes works in their luxury mansion when the city nearest to your property lives in extreme poverty.

South Africa is approaching much more highly corrupt countries of central and southern Africa it was 20 years ago. We, the Boer–Afrikaners are culturally averse to this political and social culture, in our genesis reject corruption and political face atitividade as a service to our community. If the South Africans accept a corrupt leader, okay, that is their right, but we want Boer–Afrikaners have our government, we want to protect our resources and manage them in an ethical and honest manner. 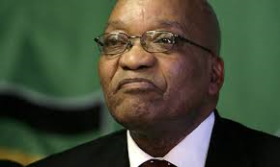